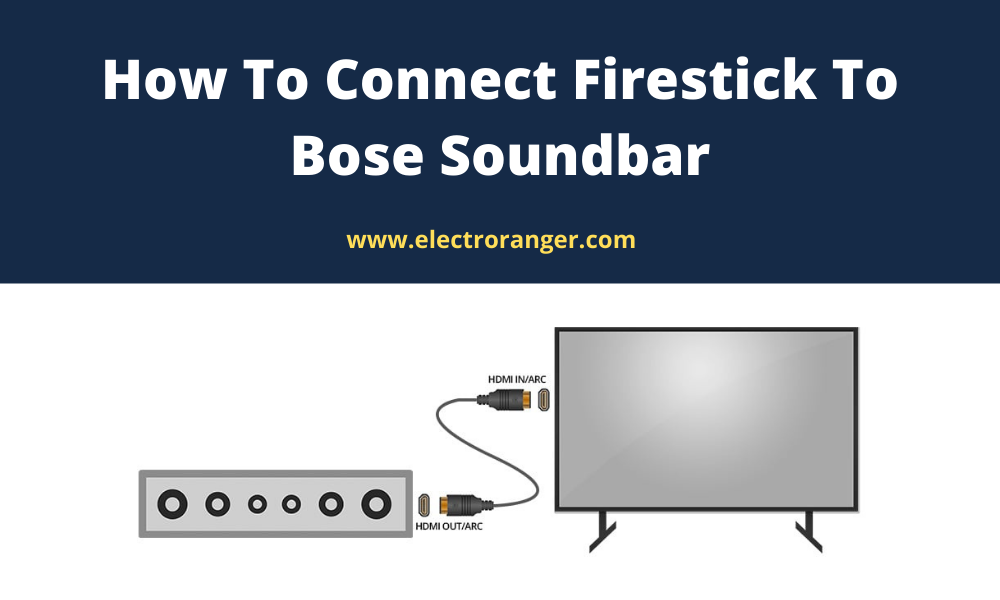 What else can be greater than having all your entertaining content on a small stick which is called Firestick? But to watch the contents from your Firestick, you need to display them on your television. And a soundbar is required to hear the audio.

That’s why you’ll need a USB and HDMI cable. In the following discussion, we’ll provide you with a step-by-step guide on how you can connect the Firestick with the Bose soundbar successfully.

How To Connect Firestick To Bose Soundbar?

You can easily connect the Firestick to the Bose soundbar by following the below step-by-step guide. You barely need 15 to 20 minutes to complete the connecting process.

However, before starting the process, ensure all the devices (Bose soundbar, television, and Fire TV) are placed closely. Here’s the step-by-step guide to connecting the Firestick to the soundbar.

Step 1: Use A USB Adapter

You’ll find two cables on both ends of the Fire TV. You can use one cable to connect with the Firestick on one end and plug the remaining cable end to connect with an adapter or other devices.

So, connect the first end of the USB adapter to the electric receptacle and the second end to the Fire TV stick.

However, it’s wise to use a USB adapter to connect Firestick to the Bose soundbar as the direct connection can cause power issues due to lots of power usage from the electric outlet.

Step 2: Connect The Fire TV With The Bose Soundbar

Make sure you stay conscious while connecting, as there’ll be multiple jacks on the back of the soundbar, and the HDMI Input and Output port can confuse you.

Step 3: Use A HDMI Cable

To complete the connecting process between the Bose soundbar and the Fire TV, you also need to comment on your television to the soundbar. That’s why you’ll need to have an HDMI cable for television.

Plugin one end of the HDMI cable in the HDMI Output Port and the other end to the HDMI Input port of your television, and that’s it.

Step 4: Modify The Sound Source Setting Of The Device

Now you need to change the device’s input sound source setting in order to start the Bose soundbar.

You’re supposed to get a remote control with the packaging of the soundbar. Use that remote to go to the settings panel of the Bose soundbar. You will see multiple HDMI port numbers in the source setting menu.

Now you need to look for the number that matches the connected fire TV HDMI port number. Once you find the match number, change the input source to the new one.

Here comes the last step of ultimately connecting your television, fire TV, and Bose soundbar together. Just like the soundbar input source, you also need to modify the sound source on television.

After you change the sound source settings in your soundbar and television also, all the components are adequately connected; you should see your desired Fire TV contents on your television and hear the content sound from the Bose Soundbar.

What If You Can’t Watch Fire TV On TV?

Unfortunately, you may still face some errors even if you follow the instruction guide thoroughly. The process may sound simple, but fire stick content doesn’t operate harmoniously every time.

However, it won’t be any significant errors; therefore, you can fix it pretty quickly without needing any cables or tools. The most common reason behind the problem is poorly connected cable, damaged cable, or wrong sound source settings.

Here’s what you should do:

If you still have issues watching Fire TV on your traditional television, the problem might be with the input and output jack or with the cable. Consider inspecting these components to troubleshoot the problem.

When you set the settings of audio on the device incorrectly, it can cause volume control issues. Other reasons for this problem can be wrong HDMI port, remote batteries out of power, or having no batteries.

To change the audio output on your Firestick, you need to go to the settings first. Then go to the display/sound menu and look for the audio. Once you find the audio menu, select Dolby Digital Plus Automatic to finish the changes.

From the above discussion, you now know how do I connect my Fire Stick to my soundbar and what you should do if the fire TV content isn’t displaying on your television.

To successfully connect the devices, you must have functional cables, devices, and jacks. To prevent errors after the connecting process, check for damaged and corroded cables and jacks.

Another thing that you should ensure is correct input sound settings. If you don’t set them accurately, you may still watch the content on television but without the audio. We hope this article was helpful for you to connect the Firestick to Bose soundbar successfully.

As an Amazon Associate, I earn from qualifying purchases.

Electroranger.com is a participant in the Amazon Services LLC Associates Program, an affiliate advertising program designed to provide a means for sites to earn advertising fees by advertising and linking to Amazon.com